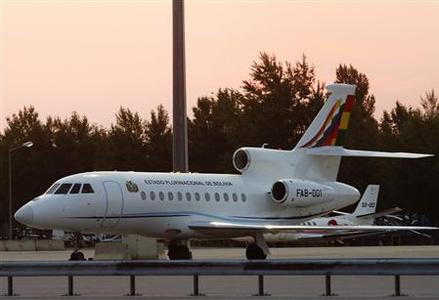 (Reuters) – Bolivia accused Austria of “kidnapping” its president, Evo Morales, on Wednesday after authorities searched his plane during a stop-over in Vienna on suspicion he was taking fugitive U.S. intelligence analyst Edward Snowden to Latin America.

A senior Bolivian diplomat said the Austrians had acted at the bidding of the United States, which has been trying to get its hands on Snowden since he revealed details of its secret surveillance programs last month.

“We’re talking about the president on an official trip after an official summit being kidnapped,” Bolivia’s ambassador to the United Nations in New York, Sacha Llorenti Soliz, told reporters in Geneva.

The Bolivian plane, which was bringing Morales home from an energy conference in Moscow, was stranded at Vienna airport for several hours after Portugal and France refused to allow it to fly through their airspace.

The search found that Snowden was not onboard and the plane eventually left Vienna about noon on Wednesday.

The 30-year-old Snowden is believed to be still in the transit area of a Moscow airport, where he has been trying since June 23 to find a country that will offer him refuge from prosecution in the United States on espionage charges.

The incident over Morales’ plane was the latest twist in a saga which has raised a furor in the United States and abroad over the balance between privacy rights and national security.

Bolivia, which is part of a Venezuelan-led leftist bloc which has challenged U.S. political and economic influence in Latin America, denounced the Austrian action as an act of aggression and violation of international law.

“We have no doubt that it was an order from the White House,” ambassador Llorenti said. “By no means should a diplomatic plane with the president be diverted from its route and forced to land in another country.”

Bolivia will lodge a complaint at the United Nations.

Austria said however that Morales had agreed to a voluntary inspection of the plane. Deputy Chancellor Michael Spindelegger confirmed Snowden had not been on the plane.

“Our colleagues from the airport had a look and can give assurances that no one is on board who is not a Bolivian citizen,” Spindelegger told reporters at the airport.

Bolivia is among more than a dozen countries where Snowden has sought asylum and Morales has said he would consider granting the American refuge if requested.

But Snowden’s options have narrowed since he arrived in Moscow from Hong Kong with no valid travel documents after the United States revoked his passport.

Five countries have rejected granting Snowden asylum, seven have said they would consider a request if made on their soil, and eight said they had either not made a decision or not received a request.

U.S. President Barack Obama has warned that an offer of asylum from a country would carry serious costs.

Russian President Vladimir Putin is unwilling to send Snowden to the United States and it has no extradition treaty with Washington. But he is also reluctant to damage ties over a man for whom Putin, a former KGB spy, has little sympathy.

Venezuelan President Nicolas Maduro, who was also in Moscow for the energy conference, said on Tuesday Snowden deserved the world’s protection for divulging details of Washington’s spy program.

Maduro said he would consider an asylum application if Snowden, who worked for the National Security Agency as a contractor in Hawaii, made one.

The European Union has demanded the United States explain a report in a German magazine that Washington was spying on the bloc, calling such surveillance shocking if true.

French President Francois Hollande said the alleged action was intolerable and could hinder U.S. relations with Paris and the EU.

The Guardian newspaper said on Sunday the United States had also spied on Asian allies Japan, South Korea and India.

Several EU policymakers said talks on a U.S.-EU free trade deal should be frozen until Washington clarified its activities.

1 thought on “UPDATE: Austria Finds ‘no sign’ of Snowden Onboard Bolivian Presidential Plane; Orders of No-Fly Came from U.S.”