(CNSNews.com) – Following on yesterday’s 10th Circuit Court of Appeals ruling that Hobby Lobby can continue its lawsuit against the Obama administration’s contraception mandate on religious grounds, the U.S. District Court for the Western District of Oklahoma ruled today that the federal government must halt all enforcement of the mandate (and related financial penalties) against the Christian-based company.

Hobby Lobby and sister company Mardel are suing the Department of Health and Human Services and Secretary Kathleen Sebelius, arguing that to force the company to pay for health insurance that must offer abortion-inducing drugs, as well as sterilization and contraception, is a violation of its religious liberty.

In his order issued on Friday, U.S. District Judge Joe Heaton said the “court concludes plaintiffs [Hobby Lobby] have made a sufficient showing to warrant the issuance of a temporary restraining order in the circumstances existing here.”

“Accordingly, the defendants [Sebelius and HHS], their agents, officers, and employees are temporarily ENJOINED and RESTRAINED from any effort to apply or enforce, as to plaintiffs, the substantive requirements imposed” by the mandate,” said the judge’s order.

END_OF_DOCUMENT_TOKEN_TO_BE_REPLACED

The Catholic media is up in arms over comments President Obama made during a speech while in Northern Ireland for the G8 summit. Obama made what is described as “an alarming call for an end to Catholic education,” in spite of the fact that it is considered “a critical component of the Church.”

In front of an audience of about 2,000 young people, including many Catholics, Obama claimed that Catholic education divides people and blocks peace, according to the Scottish Catholic Observer.

“If towns remain divided—if Catholics have their schools and buildings and Protestants have theirs, if we can’t see ourselves in one another and fear or resentment are allowed to harden—that too encourages division and discourages cooperation,” Obama said.

END_OF_DOCUMENT_TOKEN_TO_BE_REPLACED

The Vatican has secretly attributed a mystery miracle to the late John Paul II, clearing the way for him to be declared a saint.

The Holy See has yet to reveal what the miracle was or where and when it took place but Vatican sources said it would “amaze the world”.

It concerns the “extraordinary healing” of a Costa Rican woman who was cured of a severe brain injury after her family began praying to the memory of the late Polish pope, according to reports in the Italian media.

Details of the miracle are likely to be announced at the end of this month or at the beginning of July, a Vatican insider told The Daily Telegraph.

John Paul II was beatified — the first step towards sainthood — in a lavish outdoor ceremony in St Peter’s Square in May 2011.

The second miracle — which is required in order for him to be given full sainthood — reportedly occurred on the very day of his beatification.

Former Pope Benedict has moved back to the Vatican in an unprecedented arrangement that will see a ruling pontiff and his predecessor live side-by-side as neighbors in the tiny state.

Pope Francis welcomed Benedict Thursday outside his new retirement home, which is a converted monastery near St. Peter’s Basilica. The two then went inside to pray together.

The low-key return for the 86-year-old pope emeritus was off-limits to all media except the Vatican’s own media service, which announced that it would not provide expected video coverage of the event.

The former pontiff had looked extremely frail at his last public appearance in March when Francis visited him at the papal retreat south of Rome. Benedict had been living there since he stepped down February 28 and became the first pontiff to do so in hundreds of years.

END_OF_DOCUMENT_TOKEN_TO_BE_REPLACED 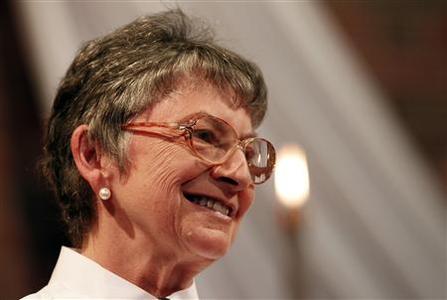 (Reuters) – In an emotional ceremony filled with tears and applause, a 70-year-old Kentucky woman was ordained a priest on Saturday as part of a dissident group operating outside of official Roman Catholic Church authority.

Rosemarie Smead is one of about 150 women around the world who have decided not to wait for the Roman Catholic Church to lift its ban on women priests, but to be ordained and start their own congregations.

In an interview before the ceremony, Smead said she is not worried about being excommunicated from the Church – the fate of other women ordained outside of Vatican law.

“It has no sting for me,” said Smead, a petite, gray-haired former Carmelite nun with a ready hug for strangers. “It is a Medieval bullying stick the bishops used to keep control over people and to keep the voices of women silent. I am way beyond letting octogenarian men tell us how to live our lives.”

The ordination of women as priests, along with the issues of married priests and birth control, represents one of the big divides between U.S. Catholics and the Vatican hierarchy. Seventy percent of U.S. Catholics believe that women should be allowed to be priests, according to a New York Times/CBS News poll earlier this year.