When agents with the Alaska Environmental Crimes Task Force surged out of the wilderness around the remote community of Chicken wearing body armor and jackets emblazoned with POLICE in big, bold letters, local placer miners didn’t quit know what to think.

Did it really take eight armed men and a squad-size display of paramilitary force to check for dirty water? Some of the miners, who run small businesses, say they felt intimidated.

Others wonder if the actions of the agents put everyone at risk. When your family business involves collecting gold far from nowhere, unusual behavior can be taken as a sign someone might be trying to stage a robbery. How is a remote placer miner to know the people in the jackets saying POLICE really are police?

Miners suggest it might have been better all around if officials had just shown up at the door — as they used to do — and said they wanted to check the water.

The FBI raided the Philadelphia Sheriff’s office Thursday and seized some of the office’s computers, a source said.

An FBI spokeswoman confirmed that it was at the office “performing normal law enforcement activities” but declined to offer specifics. She said details would not come unless charges are filed.

“So I’m at the office and in comes the FBI. They locked the doors unplugged my computer and separated everyone. I was able to take my cell phone with me and I’m currently being quarantined for what reason I do not know.”

Philadelphia Sheriff’s Office spokesman Joe Blake released a statement late Thursday afternoon saying, “As part of an ongoing investigation begun in the previous administration, the FBI arrived at the sheriff’s office at 100 S. Broad this morning with a search warrant and subpoena for certain records and files.”

END_OF_DOCUMENT_TOKEN_TO_BE_REPLACED

WASHINGTON (AP) — The Justice Department says it is looking into the shooting death of Trayvon Martin to determine whether federal prosecutors should file criminal civil rights charges now that George Zimmerman has been acquitted in the state case.

The department opened an investigation into Martin’s death last year but stepped aside to allow the state prosecution to proceed.

In a statement Sunday, the Justice Department said the criminal section of the civil rights division, the FBI and the U.S. Attorney’s office for the Middle District of Florida are continuing to evaluate the evidence generated during the federal probe, in addition to the evidence and testimony from the state trial.

The statement said that, in the government’s words, “experienced federal prosecutors will determine whether the evidence reveals a prosecutable violation.” 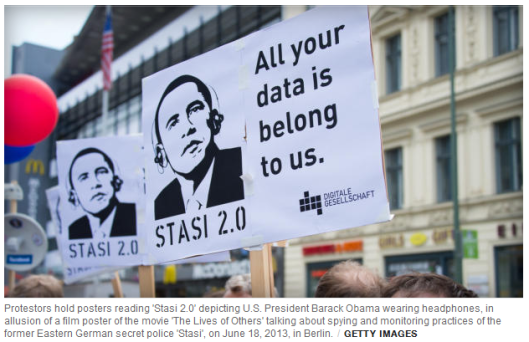 Justice Minister Sabine Leutheusser-Schnarrenberger was responding to a report by German news weekly Der Spiegel, which claimed that the U.S. National Security Agency eavesdropped on EU offices in Washington, New York and Brussels. The magazine cited classified U.S. documents taken by former NSA contractor Edward Snowden that it said it had partly seen.

“If the media reports are accurate, then this recalls the methods used by enemies during the Cold War,” Leutheusser-Schnarrenberger said in a statement to The Associated Press.

“It is beyond comprehension that our friends in the United States see Europeans as enemies,” she said, calling for an “immediate and comprehensive” response from the U.S. government to the claims.

Other European officials demanded an explanation from the U.S.

WikiLeaks just threw some gasoline onto the conspiracy fire. On Wednesday night, they Tweeted: “Michael Hastings contacted WikiLeaks lawyer Jennifer Robinson just a few hours before he died, saying that the FBI was investigating him.”

What exactly are they trying to say?

Michael Hastings was a much admired freelance journalist who covered the wars in Iraq and Afghanistan and helped to bring down General Stanley McChrystal. He was tragically killed this week in a car crash in Los Angeles, after his car hit a tree. Hastings is believed to have been alone in the vehicle.

Hastings has certainly been in contact with WikiLeaks before. In 2012 he wrote a profile of Julian Assange for Rolling Stone in which he asked tough questions – but the overall tone is sympathetic. Hastings appeared willing to accept that the US government might have targeted Assange in an effort to discredit him; the interview also highlights the failure of mainstream media outlets to expose mistakes made by the US military and generally permits Assange to push his side of the story. Hastings’ empathy for WikiLeaks ties together the deceased journalist, Julian Assange and (through Assange) the leaker Bradley Manning. You can throw Edward Snowden into that mix because he, too, is an admirer of WikiLeaks. And Hastings’ last article was about the evils of the NSA – which ended with the tantalising line, “Perhaps more information will soon be forthcoming.” Glenn Greenwald Tweeted a link to the piece after Hastings’ death. Of such connections are conspiracy theories made. In the minds of the highly imaginative, that is.

One of America’s top lawmakers has demanded the extradition of Edward Snowden, the whistleblower at the center of the US National Security Agency (NSA) internet data tapping scandal.

Peter King, chairman of the House Homeland Security Subcommittee, said that no country should grant asylum to Snowden, who is believed to be holed up in a Hong Kong hotel.

Snowden reportedly traveled to Hong Kong in mid-May from where he revealed top-secret documents over the NSA’s covert Prism spy program. The whistleblower, an ex-CIA adviser, did not “expect to see home again,” according to an interview with The Guardian.

Although the Obama administration has been pushed on to the defensive by the revelations of the past few days, the White House has not officially commented.

King said: “If Edward Snowden did leak the NSA data as he claims, the United States government must prosecute him to the fullest extent of the law and begin extradition proceedings at the earliest date.

US attorney general Eric Holder told journalists on Thursday that he would change the way the Justice Department handles investigations that involve reporters and not repeat searches that have raised concerns about freedom of the press, the editors said.

After a meeting that other media outlets boycotted because of its secrecy, the journalists who did attend said they were encouraged by officials’ expressions of regret, though one said the Justice Department still has a long way to go to understand how journalists work.

“There was a commitment to change the department’s guidelines for handling cases such as these and a renewed commitment to support a federal shield law for journalists,” said Gerald Seib, Washington bureau chief of the Wall Street Journal.

Despite the meeting’s status as “off the record,” meaning its contents could not be recorded or reported, three of the five journalists who attended spoke afterward to reporters outside the Justice Department’s headquarters.

As of now, only POLITICO has accepted the golden ticket from Eric Holder.

Attorney General Eric Holder’s plans to sit down with media representatives to discuss guidelines for handling investigations into leaks to the news media have run into trouble.

The Associated Press issued a statement Wednesday objecting to plans for the meetings to be off the record. “If it is not on the record, AP will not attend and instead will offer our views on how the regulations should be updated in an open letter,” said Erin Madigan White, the AP’s media relations manager.

The New York Times is taking the same position. “It isn’t appropriate for us to attend an off-the-record meeting with the attorney general,” executive editor Jill Abramson said in a statement.

Like the New York Times and the Associated Press, CNN will decline the invitation for an off-the-record meeting. A CNN spokesperson says if the meeting with the attorney general is on the record, CNN would plan to participate.

Republicans on the House Judiciary Committee sent a letter to Attorney General Eric Holder on Wednesday expressing “great concern” about the possibility that Holder lied under oath during his testimony earlier this month on the Justice Department’s seizing of journalists’ records, CBS News has learned.

On May 15, Holder told the committee he wasn’t involved in “the potential prosecution” of a member of the press under the Espionage Act for disclosing classified information. “This is not something I’ve ever been involved in, heard of, or would think would be wise policy,” he said.

Shortly thereafter, reports began to surface that the Justice Department, in addition to seizing telephone and email records of Associated Press reporters, had seized the the emails and phone records of Fox News correspondent James Rosen. While Holder had recused himself from the AP proceedings, the Washington Post reported that the attorney general had personally signed off on the search warrant for Rosen’s records.

In the search warrant, the FBI called Rosen a “criminal co-conspirator” and suggested there’s probable cause that he violated federal law. Rosen was not charged with any crime.