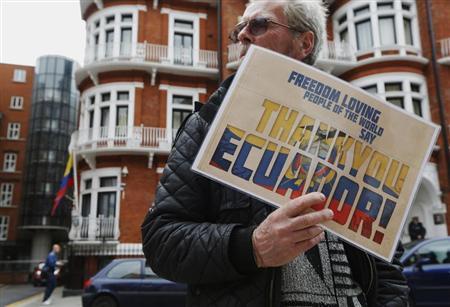 LONDON (Reuters) – Ecuador has found a hidden microphone inside its London embassy, where WikiLeaks founder Julian Assange is living, and will disclose on Wednesday who controls the device, its foreign minister said.

Ricardo Patino said the microphone was found inside the office of the Ecuadorean ambassador to the United Kingdom, Ana Alban, at the time of a visit to the embassy by Patino to meet with Assange on June 16. Assange lives and works in a different room within the embassy.

The Foreign Office in London declined to comment immediately on the allegation and Prime Minister David Cameron’s spokesman said he did not comment on security issues.

Assange has been living inside the embassy for more than a year to avoid extradition to Sweden to face allegations by two women of sexual assault and rape, which he denies.

He fears that if sent to Sweden he could be extradited from there to the United States to face potential charges over the release of thousands of confidential U.S. documents on WikiLeaks.

Assange’s group is trying to assist Snowden, who is believed to be stranded at a Moscow airport and is seeking asylum in a variety of countries including Ecuador.