Seven months after Superstorm Sandy, the Red Cross still hasn’t spent more than a third of the $303 million it raised to assist victims of the storm, a strategy the organization says will help address needs that weren’t immediately apparent in the disaster’s wake.

Some disaster relief experts say that’s smart planning. But others question whether the Red Cross, an organization best known for rushing into disasters to distribute food and get people into shelter, should have acted with more urgency in the weeks after the storm and left long-haul recovery tasks to someone else.

“The Red Cross has never been a recovery operation. Their responsibility has always been mass care,” said Ben Smilowitz, executive director of the Disaster Accountability Project, a nonprofit group that monitors aid groups. “Stick with what you’re good at.”

Storm victims could have used more help this past winter, said Kathleen McCarthy, director of the Center for the Study of Philanthropy and Civil Society at the City University of New York.

“People were cold. Homes mildewed. There wasn’t enough decent housing,” she said. “Given the lingering despair, it’s hard to understand the argument that ‘We are setting that money aside.’” 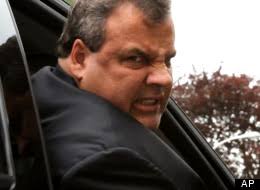 LONG BEACH TOWNSHIP, N.J. (AP) — Ever since Superstorm Sandy devastated parts of the Jersey shore last October, officials have planned for a new system of protective sand dunes along the entirety of the 127-mile coast.

And also since the day of the storm, some homeowners have refused to sign easements giving federal and state officials permission to do the work.

Their stated reasons have been fears that boardwalks, bathrooms, snack stands or amusement rides might be built nearby.

On Tuesday, Gov. Chris Christie rejected those claims in his bluntest, most off-color terms yet.

At a town hall meeting on Long Beach Island, the governor said their true objection is losing their oceanfront views.

“Let me use a word,” Christie said, urging parents of the handful of children in the room to cover their ears.

“Bull—-!” he roared, using the full version of BS. “That’s what it is! They don’t want their views blocked.”

Speaking on MSNBC’s “Morning Joe” program on the 6-month anniversary of the deadly storm, the Republican governor said presidential politics were the last thing on his mind as he toured storm-devastated areas with Obama last fall.

“The president has kept every promise he’s made,” said Christie, widely considered a potential candidate for the republican presidential nomination in 2016. “I think he’s done a good job. He kept his word.”

Christie’s warm embrace of Obama after the storm angered some Republicans, who said it helped tip a close presidential election to the Democrat and away from Mitt Romney, who Christie endorsed and for whom he campaigned last fall.