Edward Snowden is in the “Transit Zone” at Moscow’s Sheremetyevo Airport and the Russian President says his government will not extradite him back to the U.S.

Russian President Vladimir Putin has said that Snowden will not be extradited to the United States, the AP reports:

Putin said that Snowden hasn’t crossed the Russian border and is free to go anywhere.

Speaking on a visit to Finland Tuesday, he added that Russian security agencies “didn’t work and aren’t working” with Snowden. He gave no more details.

Commenting on a U.S. request to extradite him, Putin said that Russia doesn’t have an extradition agreement with the U.S. and thus wouldn’t meet the U.S. request.

He voiced hope that Snowden will depart as quickly as possible and that his stopover at Moscow’s airport wouldn’t affect bilateral ties. 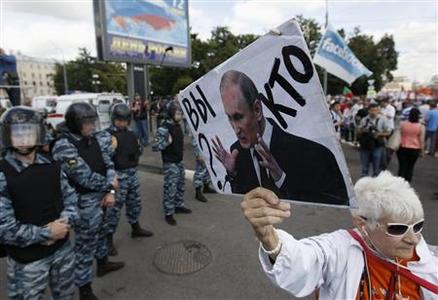 (Reuters) – Thousands of Russians marched through Moscow demanding Vladimir Putin resign on Wednesday, as the president took the helm of a loyalist movement designed to broaden his power base.

With helmeted riot police looking on, some 10,000 protesters chanted “Russia without Putin!” and called for the release of activists who face long jail terms over violence at a protest against his inauguration to a third presidential term last year.

Critics accuse Putin, in power since 2000, of clamping down on dissent after he weathered the biggest protests of his rule and returned to the Kremlin following a stint as prime minister.

“We have no democracy here, we have what Putin calls sovereign democracy. That means there is democracy for them, not for us,” said protester Andrei Rusakov, 53.

Protesters chanted “Putin is a thief” and held pictures of 12 activists who are being tried over clashes with police at a rally the day before he was sworn in.

END_OF_DOCUMENT_TOKEN_TO_BE_REPLACED

MOSCOW (Россия 24) – The president and his wife reportedly visited the ballet “Esmeralda” at the State Kremlin Palace on Thursday evening.

After ballet the couple gave an interview to the Russia 24 state television channel announcing their divorce.

Asked about longstanding rumors that they no longer lived together, the 60-year-old Mr Putin said: “That is true.”

“It was our joint decision,” Mr Putin said. The couple had been married for almost 30 years.

Mrs Putin was rarely seen in public during her husband’s long tenure at the top of Russian politics. The couple had last been seen in public together at Mr Putin’s inauguration to his third presidential term on May 7, 2012.